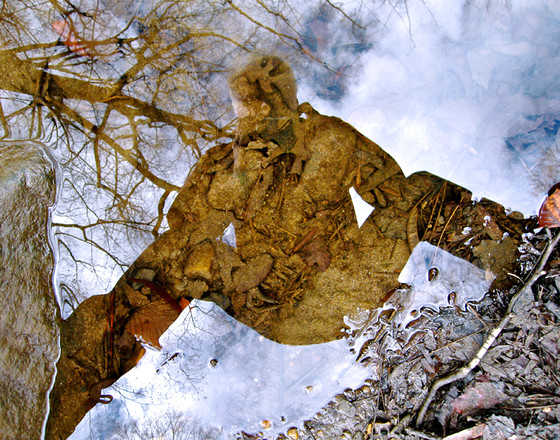 INTIMATE WATERSCAPES:
These are close photographs of light reflected on water. They take various forms: as reflections of skies and clouds, trees, and leaves, or as light itself beautifully playing across the waves, illuminating leaves, flowers, grasses and sometimes even water striders. The photographs are often three-dimensional, showing reflections of the sky interacting with movement of water, coupled with elements floating in the waves or on the streambed.

I’m after something you can’t see when standing high on a bank. To find these images, I go down to the water, walk up and down the creek in knee-high rubber boots, and sit on a shower stool, often with my lens inches from the surface. I spend about three hours at a time, quietly searching for magical interplays of water, light, and subject. Mirror-like reflections seen from the bank change as I hunker down, replaced by light that seems to reflect, illuminate, and outline a different, and often luridly colored, world.

My images are not “photoshopped” in the sense of using a computer to create imagined scenes. In these photographs, nothing has been invented or added from another photograph. Because I often shoot in very low light or conditions of glare, I use a computer to process my raw photographic files in order to come as close as possible to the vivid scenes I saw and to present them on paper and on screen as beautifully as the creek constantly does on water.

PHOTOGRAPHIC BIO:
I am a fine-art photographer based in Silver Spring, MD. Since 2005, Sligo Creek (running through Silver Spring and Takoma Park, MD) has been my major muse and subject of my series of photographs Intimate Waterscapes.
My photographic skills were honed by assisting the studio photographer in a museum, by illustrating my ethnographic fieldwork, and by documenting people and projects while working around the world with Peace Corps. Living and working among other peoples and cultures has had a profound effect on my outlook on life, and therefore on my photography. I try to look beyond surface impressions to glimpse underlying images and meaning.

I have exhibited my photographs in juried shows regionally at the University of Maryland in College Park, Penn State University in State College, The Delaplaine Arts Center in Frederick. and the Circle Gallery in Annapolis, and have had solo shows at The Blackrock Center for the Arts in Germantown, VisArts in Rockville and the Adkins Arboretum on Maryland’s Eastern Shore. A number of my photographs have also been selected for exhibit in galleries in New York, Vermont, Oregon and California, including a photograph in Best of Nature 2013 at the San Diego Museum of Natural History.  In 2019, three of my photographs were awarded Honorable Mentions in the 13th Annual Pollux Awards in Barcelona.

In 2016 I was honored to be one of 50 photographers (from 1900 entries) selected to have six photographs included in the book SEEING IN SIXES, published by LensWork and edited by Brooks Jensen and Maureen Gallagher.  In 2017, I was selected again.  The first year they chose six tree reflection photographs; the next year, it was leaves in the waters of the creek.  In 2020, after an international competition, I was chosen to be included in OUR MAGNIFICENT PLANET, Lenswork's book of 300 single, stand-alone, outstanding images of natural beauty.

PRINTS:
All my digital prints are made with pigment inks and on papers that are of archival quality.
PURCHASE PRINTS:
Please contact me directly: juliusATphotojulius.com